Tax on sugary drinks takes fizz out of Irn-Bru parent’s profits AG Barr shakes the market as it reveals a combination of factors behind an expected fall in revenue and annual profits. 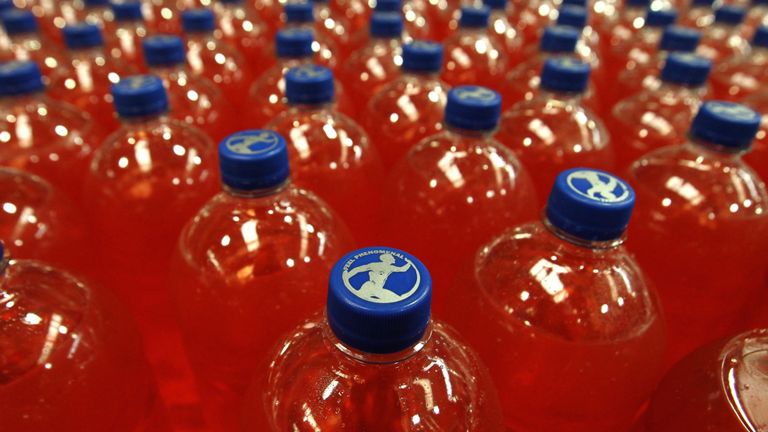 Shares in the company behind Irn-Bru and Rubicon drinks has seen its share price lose a quarter of its value after it issued a profit warning.AG Barr said poor weather in Scotland and northern England in early summer had combined with lower sales to dent demand in 2019 to date.

It pointed to a 10% fall in expected revenues for the half-year to 27 July, with annual profits forecast to be down by as much as 20%.

Image:
The funds raised from the tax are used to help fund school sport

The situation was exacerbated, it said, by a strong 2018 for the group despite a backlash by some customers against reduced-sugar recipes in popular drinks brands – a response to the tax on sugary drinks imposed last year to help cut obesity.The company pointed to specific brand challenges, “particularly in Rockstar energy and Rubicon juice drinks”.

The Rockstar energy division has also had to contend with a crackdown and awareness-raising by campaigners about teenagers consuming high-caffeine drinks.

Several supermarkets have banned sales of the products to under-18s.

London house prices fall at fastest rate in a decade

EU to investigate Amazon over use of sellers’ data

Rate of inflation remains at Bank of England’s 2% target

Simon Brown: Govia Thameslink fined £1m over death of passenger who ‘put head out of window’

AG Barr chief executive Roger White said: “Weather comparatives and trading, particularly in the impulse on-the-go market, have been even tougher than expected which, along with some brand-specific challenges, have led to a short-term impact on our financial performance.”We are focused on returning to growth and will continue to take the actions we believe necessary to succeed in the dynamic environment within which we operate.”These actions include launching three new Rockstar drinks by the end of the summer and “recipe improvement activity” for Rubicon juice drinks.Commenting on the surprise update Russ Mould, investment director at AJ Bell, said: “One can excuse the drinks company for not selling as many products in these conditions; however, specific brand challenges with Rockstar and Rubicon are slightly concerning.”